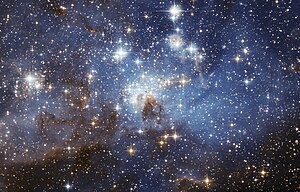 It’s official, we live in an ever-expanding universe! First reported in 1998, the discovery earned three scientists the 2011 Nobel Prize in Physics. Half of the prize was awarded to Saul Perlmutter, from Lawrence Berkeley National Laboratory and the University of California, Berkeley. The other half was awarded to Brian P. Schmidt of Australian National University and Adam G. Riess of Johns Hopkins University and the Space Telescope Science Institute.

No longer can the concept of an ever-expanding universe be considered new age “bunk.” Measuring light coming from exploding stars, the scientists set out to prove that the expansion of the universe was slowing down and they found just the opposite. Their independent discoveries indicate that the universe is expanding at an accelerating rate. Apparently there is some sort of mysterious and invisible form of energy that counteracts gravity and is pushing matter apart. Imagine that! Reiss says that 74 percent of the universe consists of this dark energy.

So what does all this mean? Everything is possible! When we say something is true, it really means that that’s what is commonly accepted right now either because it has been said over and over for a very long time or we simply don’t know any different.

So everything and anything is possible! This is great news. Consider how this applies to your own life â‚¬Â¦your long held beliefs, thoughts, feelings, habits, ways of being, doing and living. If something is not working for you, change it. Adopt a different set of thoughts or beliefs about the situation. Try something new. Take different action. Expand your possibilities and create new energy. Step into some of the new and exciting energy of the universe.

Stepping into the unknown can be daunting. Among other things, it requires strength and courage. Strength to carve a new path and courage to withstand the naysayers or anyone who doubts new possibilities. Just because something hasn’t happened does not mean it is not possible. Everything is possible. Twelve years ago I left a well-paying corporate career because it felt right. I was ready to do something else. I was excited about the possibility of what was coming next, although I didn’t know what that would be. I just knew it would be worthwhile. Even though I was the family “breadwinner,” I consciously followed my passion and delved deeply into topics that interested me. Professionally, I entered a new field, launched my own business, co-authored a book, collaborated with like-minded partners, co-wrote a newspaper column for 4 years and kept pace with the explosion of technology and the birth of social media. On the personal side, along with my husband, we raised our daughter and became a meaningful presence in her life, led a Girl Scout Troop for 12 years, assisted my parents for 10 years, took more time for pleasure, did some traveling, read an amazing assortment of books, stayed healthy and much more. Now that our daughter is happily settling into college, I’m ready to expand again. The possibilities are endless.

Long ago I realized that we do live in an ever-expanding universe and that everything is possible. It is here for us to claim. It is our birthright. If you aren’t already doing so, experience it directly. Make new and conscious choices for yourself. You may be amazed with what is possible. Isn’t yesterday’s Nobel Prize in Physics proof enough?

« Energy, Music and Laughter
Pain: Does Meditation Make a Difference? »